As you might remember from my last blog, I’m currently travelling and hadn’t intended to post much on here along the way – but there’s just so much in the way of colourful geometric patterns here that I couldn’t resist! I’m in Cusco, typically known as the gateway to Machu Picchu – but also home itself to a lot of Incan history and temples. And their civilisation (like me!) seems to have loved geometric designs EVERYWHERE…

The Incan people began as a tribe in the Cusco area around the 12th century AD, and gradually expanded their empire around the Andean region into Ecuador and Argentina, until the country was conquered by the Spanish in 1572.

Symbols – Animals: Prior to the colonial era, the local language was Quechuan, and the name Cusco came from Qusqu, relating to ‘rock of the owl’ from a founding legend. Many believe that the city was planned as an effigy in the shape of a puma, a sacred animal (see below an old depiction of the town from above). There are also rock combinations built into the city walls resembling their 3 holy animals: a puma, a snake and a condor (similar to land, earth and sky). And of course there are many llamas here within spitting distance, believed to have played a big role in the rise in prosperity of the region. So a variety of animals play a big role in the patterns we’re going to see too – even better!

Symbols – Inkan Cross: or Chakana (from the Quechuan for ‘bridge’) is a strong symbol of the old cultures of the Andes and is considered the most holy geometric design of the Inkas. It represents the constellation of the Southern Cross, which the Incas believed to be the centre of the Universe. Also the four big corners are supposed to symbolise North, South, East and West, and the 12 corners represent the 12 festivals or months of the Inkan calendar. The symbol is often incorporated in such a way that only half of it protrudes – and so the shape is completed by shadow from the sun, representing the non-material world. See how many times you spot it below!

Tocapus: a design motif of repetitive, checkered geometric patterns that is typically used to draw together the ‘tapestry’ of symbols or meanings. Within each of these checkered squares the weaver may include smaller geometric or figural designs as well. The most commonly displayed design of the Incans, below, is one such Tocapus: 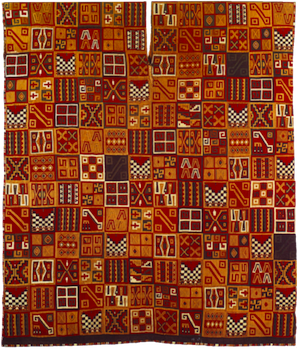 Colours: the Incas would have had to use the limited colours available to them, but they liked bright designs. Each colour of course had a meaning attached:

So it’s typically in these colours that you will see the true Incan patterns. Some more recent ‘tourist’ patterns may deviate from this into more garish colours! Compare the two… 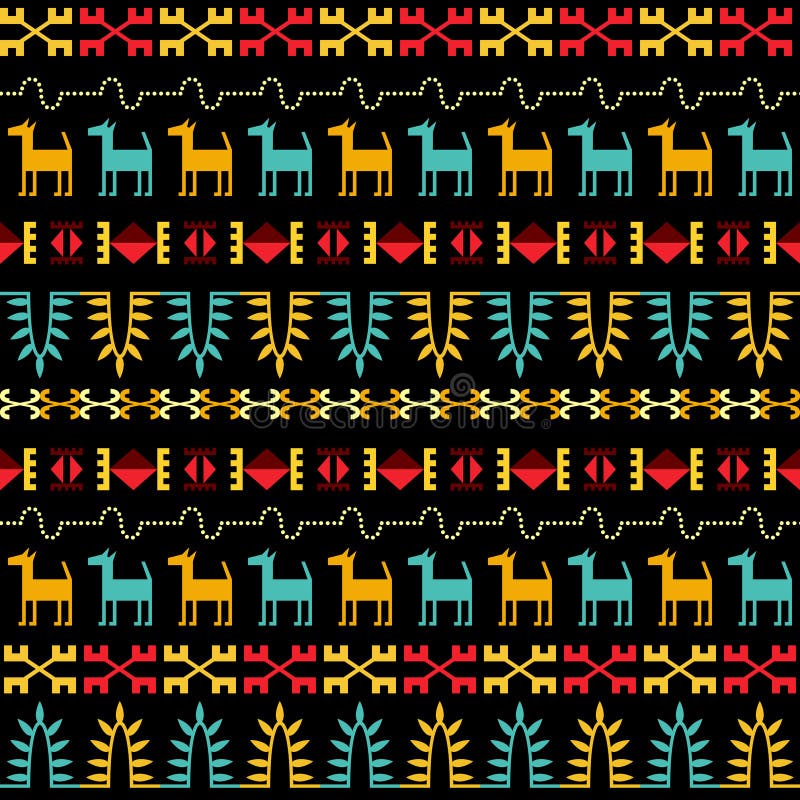 The importance of symbolism meant that the Incas used these patterns & geometric design everywhere – they were pervasive to almost every aspect of the lives of the Incan civilisation! They feature in:

Their homes and temples: Incan architecture is strongly characterised by its use of the natural environment, merging well with, and adapting well to, its geographic variances. This meant not just fitting structures around awkward outcrops at altitude, but also using an early form of earthquake-proofing. Usually the walls of Incan buildings were slightly inclined inside, corners were rounded, and windows were strong trapezoidal shapes, leading to exceptional seismic resistance thanks to an absence of stress concentration points. Thankfully so, as they are also very beautiful!

Their livelihood – farming terraces, again incorporating the natural environment to make best use of flat spaces (and maybe some symbolism that no one seems able to explain?):

Their art – pottery and paintings:

Even in their eating!

Some more Incan (and pseudo-Incan!) designs, just for fun…